Poetry written by my most precocious group of girls usually inspires me to blog. This batch has been no exception, so with no further ado (and no mention of how shamefully long it’s been since my last post)…

‘What Are You Looking At?’ by Libby.

What are you looking at?
I know, I know I’m pretty better
than YOU!

What’re you looking at?
I know, I know I have a big
eyes but you’ve small eyes.

What’re you looking at?
I know, I know. I look like a
rabbit & hamster.

Oh, Libby. You’re only 13… So many more years for your ego to grow, so many more plain girls’ lives to ruin with cruel taunts and jibes!

When she goes to the bed,
she looks like a purity lily.

When she plays with her friend,
she looks like fresh dandelion.

I can’t say anything bad about this one. Once again, Mary, I think you have a talent.

On Monday, my mommy
give me a present “Dog”.
I’m so happy
Happy is cotton candy.
Cotton candy is sweet
Sweet is Juliet.

Today, my mother bought
a rabbit. But rabbit
is ate a all vegetables and
ddong (Korean for ‘shit’) Oh – and she eat flowers.
My mother angry with
rabbit. But, it’s pretty.
What should I do? I want
to keep rabbit but my mom
angry.
Don’t do that, Rabbit!

So much has happened since I last posted a blog on July 1st. I should have written about each and every brilliant thing, but I let it slide. The first excellent thing to happen in July was Boryeong Mudfest 2009 – a huge free festival on the West coast. We simply had to book a space on a coach and motel room for the Saturday night. The mud apparently has healing properties and, once there, you can run onto the crowded beach and smother yourself in it. It really was liberating. 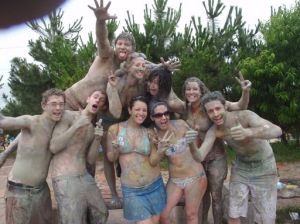 Brilliant weekend. Later in July, we hit the Jisan Valley Rock Festival. I’m panicking now because I can’t think of a way to describe how amazing this weekend was, one of the best things I’ve done in Korea. Great in every way, spent with close friends and so very eventful. Frank and I split from the crew on Saturday night and made our ways to the second stage in a tent. A Korean reggae band, Windy City, were playing. I hadn’t skanked like that since the Arts Centre in Salisbury as a 15 year old mosher, but the most enormous circle pit formed – Frank and I danced for an hour straight, totally swept away in the atmosphere. I’ve rated it in my top Korea experiences, 9 of which are documented so far. They are as follows (in no particular order):

2. Dancing to the sound of 30 Korean drummers, after dark and beer in hand, on Gwangalli beach (Busan).

3. Hiring bikes on Seokmodo, peddling/pushing them to the top of a tough hill then freewheeling down the steep hill for ages the other side.

4. My spiritual trip. Life has been better since that night.

5. Slapping on the coloured mud at Boryeong Mudfest 2009.

6. In a Noraebang in Suwon, in particular Faye’s rendition of ‘Ting Tang Tong’.

9. Stumbling up to a Japanese Supercar on the street in Busan, then suddenly realising I was being driven at over 100mph down backstreets. I was drunk enough that no-one believed my story when the owner dropped me back at exactly the same spot outside McDonalds 5 minutes later.

Some will remain cryptic. Frank arranged for us to be picked up in a car from Jisan Valley Rock Festival, by the girl he used to give private lessons to. She had subsequently fallen in love with him, stopped paying for lessons and become very strange indeed. When she arrived just before Oasis’ set, she stared at him longingly and said ‘I haven’t eaten anything today except for a chocolate bar. I’m on a diet so that you’ll want me. I must make myself thin for you’. Poor girl.

Two days later and I was on a bus to Incheon International Airport, to board a Cathay Pacific flight to Taipei, Capital of Taiwan. I had 7 days for Summer holiday so along with Frank, I packed my tiny red backpack and ventured off. Pictures to follow: 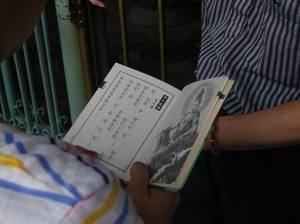 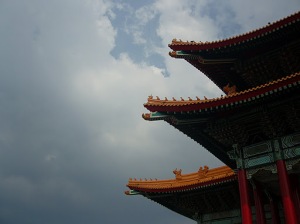 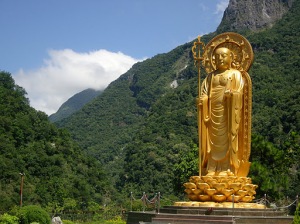 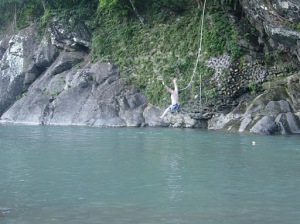 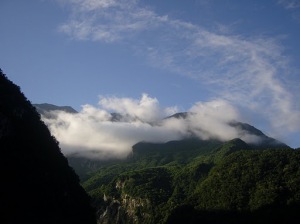 In Taiwan, I : ate snake, drank snake blood, Cobra poison & snake penis suspended in alcohol, ascended the World’s second tallest building Taipei 101 and gazed out across the city in awe, hiked through jungles with monkeys & poisonous snakes, swung from rope swings into fast moving rivers naturally heated by hot springs, ate copious amounts of chinese dumplings, got wired on betel nuts and stayed at one of the best hostels in the world (Eight Elephants, Taipei). We nearly missed our flight on the way home. I was convinced it was a 20:00 return, but no, too many betel nuts had turned my mind to mush and teeth red. It was a 17:30 return. What a rush it was racing to the airport! I fell for Taiwan. In years to come it will be on every tourist trip around South East Asia. Until then, I’m going to feel quite pioneering for going there when not many others have. Great country. Delicious food. Tropical island. Such friendly people. GO NOW!

Since getting back from Taiwan, I’ve been really enjoying Korea. I’ve taken the opportunity to explore Seoul on my own a lot and it has been great. The last 6 weeks have involved hike after party after hike after party. A highlight was being alone on Inwangsan, a mountain North-East of downtown Seoul. Famous for its seclusion and female shamans who hate being watched, I found a spot on the hill above the shaman temple to observe. I closed my eyes as they began this other-worldly chanting, drifting off to strange places in my mind as I listened.

I’ve also said goodbye to some close friends recently. It has been truly shit. The gorgeous Faye, who has returned to England at short notice to take up a space on an over-subscribed PGCE course she applied to before Korea. Good luck Faye –  love you and miss you! (I won’t stop telling you about all the great Korean food you’re missing out on and the crazy nights out we’re having). And who could forget Pyeongnae’s very own Johnnie Walker. I’m not going to get to get mushy but we miss you. Dinner ain’t the same without our chats. Now that you’re gone we only eat out once or twice a week. No longer is it every night. At least I know I’ll be staying in contact with you both but it’s still sad to lose your close friends; such is the transient nature of teaching English in Korea.

This weekend that’s just gone, we explored Hongdae (in Seoul) during the day. It’s such an arty place! Our goal was Bau Haus Cafe – the cafe where you can have a coffee/milkshake/beer with over 20 different breeds of dog to play with whilst you do. It was such an interesting experience, although most of the lovely happy doggies acted like spoilt cats and mainly paid attention to the nice Koreans with bags of posh bones. SNOBS.

Today I taught my director’s daughter just like I do every Monday, Wednesday and Friday. She demanded two things from me. One was a staring competition. The other was a holding-your-breath competition. Needless to say, I won at both. What with this fantastic news and the recent Casino winnings, you could say I’m on a bit of a lucky streak.